The Vanishing Kings Foundation raised all the funds to sponsor Dr Philip Stander in writing a book about his twenty years of research on Desert Lions.

When Philip arrived in the desert in the 1980’s it was believed the Desert Lions had gone extinct. But he discovered a small lion pride in the most secluded part of the desert. What followed was a life-long commitment to these unique lions that came back from the brink. Over the years Philip observed that the Namib was losing its Desert male lions at an unsustainable rate, due to trophy hunting, poaching and conflict with the rural people. The male lions became the main focus of his study, and Philip gained a tremendous knowledge about their way of life.

For more information on the book, visit: www.vanishingkingsbook.com 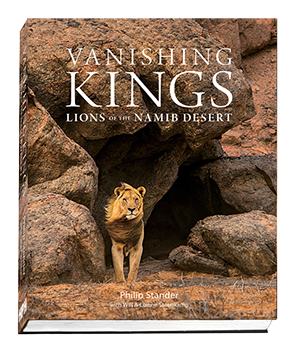